all words & phrases are the intellectual property of kimann schultz, having been composed & employed by kimann, verbally or in written text. copyright 2013-21

a number of my words have been accepted into urban dictionary, where i submit as “ka the wordsmythe” & “ka the wordsmith.” UD-posted words & terms are link highlighted 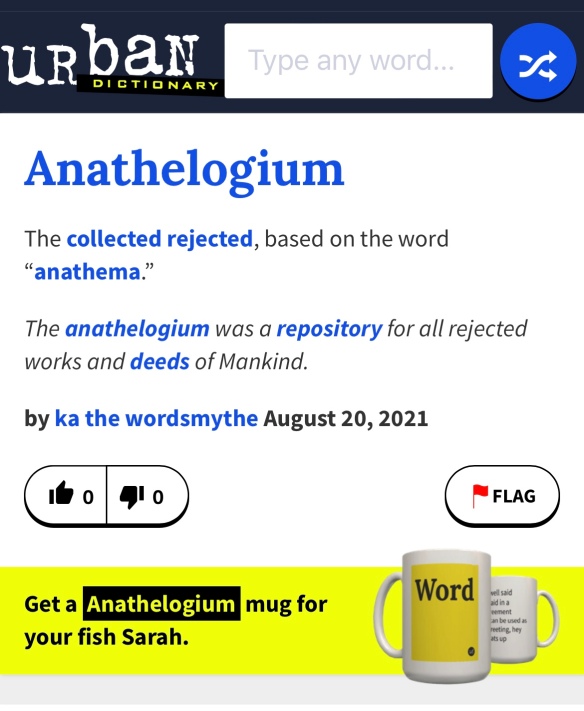 A Draftmyte is a nano-sized gremlin that travels about the internet and resides in personal computing devices, which seeks out written documents in order to insert errors and writing glitches into them, both obvious and hard to find, when the draft composer is away from their device. A Draftmyte, with its ability to bypass auto-correct and review programs, is the bane of all writers. Sample: “The frustrated writer could have sworn his story was flawless when he submitted it, but he later found a number of errors, surely the work of draftmytes, which had no doubt infected his computer.” (UD)

Partnership Paradigm – acknowledges the positive economies of scale of committed relationships: As in business, the sum is greater than its parts & more efficiently executed when complementary skills/contributions & shared endeavors & pleasures are combined for optimized results & satisfaction for each member of the couple, & for the couple itself. 6/21/19 (UD)

Virtue Vetting – “The process by which any individual’s accomplishments and/or creative output is deemed valid based on the virtue – or perceived virtue – of said individual. Inversely, to make eligible for censorial callout and shutdown any work or creative output of any individual deemed unvirtuous. sample sentence: “The painting was removed from the exhibit after the artist, who had indeed endured a troubled past, failed to survive the virtue vetting of a group of highly motivated and vocal museum supporters, who claimed to be offended by the work’s inclusion in the show.” (submitted and accepted 10/3/18 to UD)

Pavloved: (for this one scroll down to def #2 by KA the wordsmythe) To become addicted to click n swipe reward reinforcement on social media. sample sentence: The quip went viral, leaving the anonymous poster fully pavloved, after which he spent even more time on the social media site each day, completely hooked on the virtual attention, looking for more (UD)

Double Grubber – a money grubbing cheater who, once paid off, comes back at some point to cash in another time. sample sentence: “The doublegrubber was featured in a TV interview last night, where he re-told the story about his alleged affair, despite the fact that he had accepted $100,000 dollars in hush money ten years ago”

Puritanistan – a society surpassed and subjected to extreme and radical censorship, the term referencing the restrictive ways of the Puritans, and its later use as reference term, puritanical

Suffrajet Black – a play on the terms Jet Black and Suffragette, which relates to the Hollywood Feminist wearing of black garments to indicate solidarity with the #MeToo movement (submitted 2/17, accepted 5/5) (UD)

Beta Bitch – Women/all who think it is a feminist strategy to bitch about anyone and everything but do as little as possible about that which one is bitching. sample sentence: “The Beta Bitch insisted on hiring a cleaning lady and nanny because she was online all day, blogging and tweeting about how suppressed she was.” (UD)

Trend Gen or Trend Generation – Another name for the Millennial Generation, pointing to their malleability and predominant ID as a consumerist demographic, a choice target for all supply-side industries thanks to the Internet and social media in particular, for this group’s providing its own free advertising 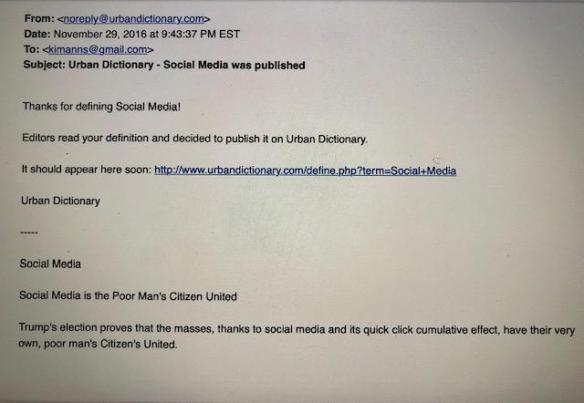 Shame Phishing – The duplicitous posting of images and information intended not to honestly share but to troll for negative commenters in order to attack them. (UD)

Fauxtarian – anyone who adapts a platform with outward/public displays of its belief and adherence, who in actuality only follows said platform when it is convenient for them or for show. fauxtariansism is an attempt to create depth of personality via false convictions, practiced and broadcast to garner attention or gain inclusion, rather than it being a personal decision or belief implemented without fanfare in one’s day to day. (UD)

Eivis-Pelvis Shockability – feigned or genuine, fleeting or unremitting, shock, outrage and condemnation as expressed by anyone older over the doings or abilities of anyone younger, founded on the older person’s inability to adapt to or understand and assimilate the same, which serves to define and separate the generations. can be meritless, can be valid

Scientesse – In entertainment, any female scientist character burdened with sexist, cliché-ridden faults and shortcomings, applied so as to move the plot forward via their backwards deeds and behaviors (UD)

Mom Bling: Any type of jewelry as gifted by a child to its feminine/maternal mentor/care-giver/loved one. Nope, this does not include the unfortunate tokens (love + obligation – lack of time = unwearable trinket) given by well intended but taste-challenged/uncaring/late-running spouses/significant others

Trickle-down Largesse – luxury realm acts, activities or endeavors done in the name of charity, especially those done, as luxury-seeking activists claim, to “raise awareness” of selected charities or maladies, most especially where there is no direct contact or financial gain for the recipient (UD)

Vicarious Philanthropy – token charitable giving occurring at point of purchase at the retail level, where charitable causes or groups are tapped for marketing by for-profit business entities. this includes so-called reality television philanthropic programming, where grandiose giving to a select recipient is presented as a form of entertainment and viewers, while remaining fully passive, are made to embrace self-congradulatory, false feelings of charitability for having viewed the commercially sponsored program

Upper Echelonism – an attempt to cater to or achieve via pretense, often coupled with an illogical belief that certain groups’ or individuals’ dollars possess greater value than all others’ dollars & are therefore more worthy of pursuit

Puddlemouse – a foundling animal, left to die but having survived to live on. honors Boots the cat, who, newborn & abandoned, was found in a puddle of water & described as looking like a wet, grey mouse

Holding Court – in online discourse & planning & in conversational threads, the act of re-throning oneself time & again by virtue of the length of one’s emails alone (written solely so as to exceed all others), though content can be & often is redundant due to its being irrespective of previously covered facts & conclusions. aka anti-brevity attention mongering

Crystal Fishbowl Effect – pop sociological term describing the effect on an individual when cast and starring in a reality tv show, whose behaviors and life choices are molded by his/her awareness of an audience’s presence, as well as the positive and negative effects fame/fortune/celebrity has on this individual. behaviors and life choices include: competing for attention/air time, aggressiveness/pecking order establishment, personal disclosure and candor, deception and honesty, partner selection and commitment

Connected Parenting – the antithesis of Attachment Parenting, the focus being intellectual & psychic connectivity, protective of the dynamic of the parenting couple, where the parent is boss & the traditional familial hierarchy is intact. the parent is also neither appeaser nor default playmate, & respect is equally merged with love, the goal being non-centric, inclusiveness & connectivity between parent & offspring that surpasses literal, physical attachment & post-infancy parental meta control

EZ Appeasement Parenting – alternate name to otherwise describe and challenge the Attachment Parenting trend: co-sleeping, extended breastfeeding and non-authoritative methods that suggest an inverted familial hierarchy, in which the child is boss, where its every demand & desire is granted in a misguided, anti-confrontational attempt to keep the child “happy” (UD)

Inner Voice Access – pertaining to conscious-state “hearing” of voices in one’s head; the layered dialogue(s) as arising from the sub- an unconscious mind, currently still classified as an aspect of schizophrenia, currently accepted as when received in completed “batches” in the form of intuition, inspiration and explosive creative manifestation

Logorificness – the logo-like quality (brevity, consonance, alliteration & illustrative qualities) of any given word or proper name

Schneik – alternate spelling and specific reference to dung, or shit

Viralization – (1) support gained via social media of any shared word/image & deed carried out with the express intention of its going viral, in which the gaining of fame/notoriety overrides or supersedes the deed or action itself as founding impetus. (2) fame/notoriety/major media acknowledgement based on the sole criteria of accumulated high numbers of social media facilitated quick clicks as determined by the lowest human attention quotient, tech addicted masses with the most idle time on their hands (UD)

Mind Pop – when in the course of being occupied with a random, unrelated activity, with or without a linking visual prompt, an unbidden memory is suddenly recalled to remind or prompt one to follow up as to the recalled item or event and its current state or whereabouts